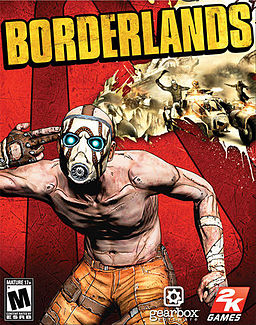 Borderlands is a first-person shooter game developed by Gearbox Software. It was hyped pretty heavily before it came out, and for the most part it lived up to expectations. One of the most notable things about the game is its sense of humor, which might keep you entertained along with the fun gameplay.

The game is designed to progress through two different playthroughs of basically the same content and story. When you beat it the first time, you will probably be halfway to the level cap, and you will unlock a higher difficulty level that starts at that level. The enemies in the game all have levels to determine their damage and toughness, so the second playthrough simply increases their level to match your expected level after your first playthrough. While some might consider this a trick to make content last longer without the developers actually putting more work into it, it's not that bad. The game is very fun, so playing through it twice to unlock your character's full capabilities and the best weapons is not a big deal.

The game was advertised as having "millions of different weapons". While this is technically true, they accomplish this by means of an item generator. There are only a few types of weapons, and they simply randomize several different stats for a weapon drop, then claim it's a whole new weapon. Each character has specific weapons that he/she is supposed to use, as he/she will receive bonuses to those weapons throughout his/her talent trees.

Each character gradually unlocks new abilities as you level up. You start with a special ability (once you hit level 5), and the unlocks after that all improve various aspects of your character and his/her special ability. The talents progress through three separate trees per character that all have a different focus; for example, Mordecai has a tree for sniping and another for his Bloodwing pet. Often times, combining different talents in each tree is the best way to optimize your character, but you can try pretty much anything you want, adding a decent amount of depth to the game.

One flaw in the game is the fact that it's very unbalanced. Lilith the Siren is far and away the best character in the game. When optimized, her sub-machine guns will massacre all of the toughest enemies in the game in seconds without you even needing to pay attention. Mordecai the Hunter and Roland the Soldier are decent depending on your play style. Brick the Berzerker is worthless. Every enemy in the game is many, many times stronger in melee than it is at range, so the fact that Brick is melee-focused means he is a complete joke. That is another flaw in itself. There's no reason why enemies need to be that strong in melee.

Multiple DLCs have been released for Borderlands, and they are all worth playing. We recommend getting the Game of the Year Edition, which includes them all.